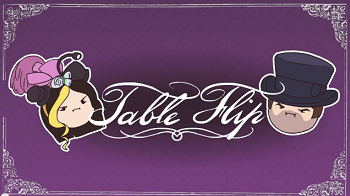 Featuring the lovely Suzy and the impeccable Barry!
Suzy: "Old-fashioned games!"
Barry: "And new-fashioned friends!"
Both: "Come on everybody, this is Table Flip!"
Advertisement:

Table Flip is a spin-off series of Game Grumps that stars Suzy "Mortem3r/Meeperfish" Berhow (wife of Game Grumps co-host Arin "Egoraptor" Hanson) and Barry Kramer (the Grumps' editor and uploader) and ran from 2013 to 2016. The show also had a number of recurring guests that are either Grumps or fellow YouTube personalities (ex: Markiplier, Captain Sparklez). Rather than playing video games, this series focused on tabletop games with a set and costume design that resembles the Victorian era.

There were often large intervals of time between episodes due to production factors. Episodes were released in "seasons" with a different amount of episodes in each season. Due to the show's high-budget and ownership by Polaris rather than the hosts, the show moved in July 2015 to Sling, a United States-only online TV service with a monthly subscription fee, with the promise of being uploaded to the Game Grumps channel two months later. This was met with criticism from fans. In October 2016, the final Table Flip episode was released.

Advertisement:
Games played on the show

For the trope about flipping tables, see Flipping the Table.