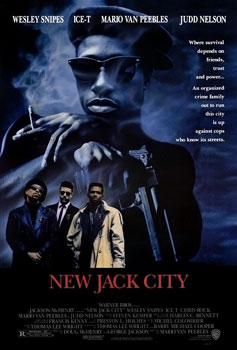 "Idolator! Your soul is required in Hell!"
—An old man, from the final scene of the film.
Advertisement:

Snipes plays Nino Brown, a rising crime lord and drug dealer in New York City, who takes control of an apartment complex and capitalizes on the crack epidemic. But he is opposed by undercover cop Scotty (Ice-T), whose mother he killed back in the day. And now he vows to stop Nino and the deadly CMB at all costs.

Rumors of a straight-to-video sequel have popped up, but has not been officially confirmed as of yet.

Not to be confused with an episode of Father Ted.