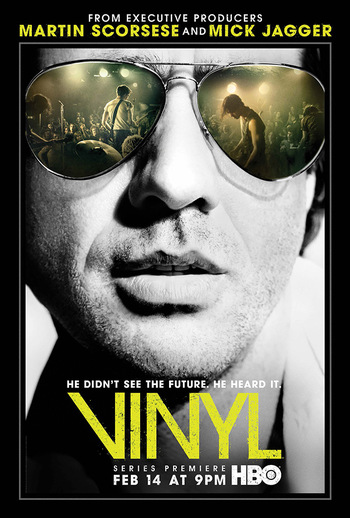 "Musicians are not your friends. They are products."
"So, this is my story, clouded by lost brain cells, self aggrandizement and maybe a little bullshit, but how could it not be in this fucking life? But let me shut up, put the record on, drop the needle and crank up the fucking volume."
— Richie Finestra
Advertisement:

Vinyl is a 2016 HBO series created by Mick Jagger, Martin Scorsese (who also directed the pilot), Rich Cohen and Terence Winter. It stars Bobby Cannavale, Ray Romano, Olivia Wilde, Juno Temple, James Jagger,note Son of Mick Ato Essandoh and an expanding cast that shows the diversity, excitement and brutality of the music business in The '70s.

The story begins with Richie Finestra (Bobby Cannavale), the owner and boss of the American Century label. It is staffed by Zak Yankovich (Ray Romano) who is in charge of payola, Skip Fontaine (J. C. MacKenzie), head of sales, and his A&R (Acquisiton and Repertoire) that is responsible for finding new talent for the record company, that includes Jamie Vine (Juno Temple) a junior assistant who wants to climb up into the big game. Alongside this are musicians, aspiring ones like Kip Stevens (James Jagger) the frontman for the proto-Punk "Nasty Bits" and a slew of actual bands and musicians from this era: New York Dolls, Led Zeppelin, David Bowie and many many others. At the start of the show, Richie Finestra is a mid-life crisis with an uncertain marriage to his wife, Devon (Olivia Wilde) and the buying out of his beloved company by the German Polygram. He is disappointed that American Century has not put out quality and successful records recently and is desperate that the company get on the train for the new sound of The '70s, Punk Rock, Disco and Hip Hop.

The show is notable for its period detail in recreating the bygone world of New York City during The Big Rotten Apple era which in the view of its creators, Scorsese and Mick Jagger, nonetheless allowed for a creative explosion. It features actors playing as period rock stars with cover-versions of famous tracks standing-in for the period.

The show was expected to last for two or more seasons, but after disappointing ratings and a poor critical reception, HBO cancelled the show after its first season.