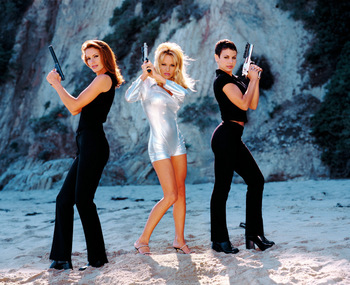 "The beautiful and lethal Valerie Irons: plucked from obscurity to head an elite Los Angeles bodyguard agency. They know how to get things done... eventually."
Advertisement:

VIP, an action/comedy Pamela Anderson vehicle created by J.F. Lawton, aired in syndication for four seasons from 1998 to 2002. Anderson plays Valerie Irons, a... blonde... who lucks into a celebrity date to a movie premiere, blunders into saving his life, and – after her date lies to save face by claiming she was his bodyguard – is snapped up by a local celebrity protection agency as a figurehead leader/mascot to draw in business. Hilarity Ensues.

Something of a Spiritual Successor to Baywatch considering the shared star, mix of action and Camp and prevalence of Fanservice throughout. Unfortunately this similarity stretches to the series's DVD treatment, with only the first season released by Sony Pictures Home Entertainment back in 2006. There remains no word on additional releases.

No relation to the Japanese Super Mario World ROM hack series. Or to the 1963 film The V.I.P.s.

Example of:
Between My Legs