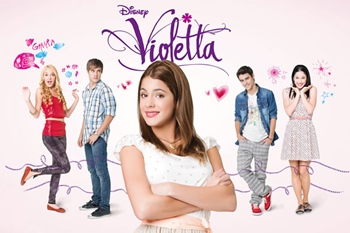 From left to right: Ludmila, León, Violetta, Tomás and Francesca.
"Cantar es lo que soy."* "Singing is what I am."
Advertisement:

Violetta is a Disney Channel teen soap opera that first aired on May 14th, 2012 in Latin America. After a run of 240 episodes across three seasons, it ended on February 6th, 2015.

Violetta (Martina Stoessel) is a teenage Argentine girl who has just moved back to her hometown, Buenos Aires, from Spain. There, she will find love and discover her talent for music. However, her father, Germán (Diego Ramos), forbids her to pursue her talent because her mother died in an accident during a concert tour he wanted her to take. From time to time, she escapes to an art academy for teens called Studio 21, where she meets new friends, finds love, and works on her music.

From season 2 onwards, Violetta and friends deal with their fame from being featured on the YouMix website in the second half of season one, whose partnership with the studio also causes it to be rebranded as Studio On Beat. Germán struggles with giving Violetta her freedom but tries his best to support her through her journey. While she continues to deal with love triangles, Violetta will also face new challenges and changes in her life.

Being co-produced with Pol-Ka Productions, this is Disney Channel's first original telenovela. Thanks to its success, it wouldn't be the last; with Soy Luna, Disney XD's O11CE (known in English as 11), and BIA releasing afterwards. Violetta was mostly shot in Argentina, but has a multinational cast and has been aired in at least 140 countries. It received a rare (at the time) live-action English dub that first aired in the United Kingdom and Ireland on July 22nd, 2013. In the United States, the first season originally aired in Spanish on Azteca from September 1st, 2014. Eventually, on July 10th, 2015, Netflix put the first two seasons on their streaming service dubbed and subbed, with the last season following on December 31st of that year. As of 2020, the complete series can be seen on Disney+ either dubbed or with dubtitles.

After the series ended, a movie, titled Tini: El gran cambio de Violetta* "Tini (Stoessel's nickname): The big change of Violetta" (Tini: The New Life of Violetta in English) was first released in France on May 4th, 2016, with the rest of Europe and Latin America getting theatrical releases soon after. Some time after the series finale, Violetta returns from an exhausting world tour and is shaken by rumors surrounding her love life. Germán gives his daughter an invitation to spend some time with a mysterious family friend named Isabella at her house for young artists in Italy. There, she will try and find her true self and inspiration... and also find herself in another love triangle. The film ties in with Stoessel's start of her solo career, and is inspired by her transitioning to a post-Violetta life. It is available on Netflix in the US and Canada, and on Disney+ or HBO Go elsewhere.