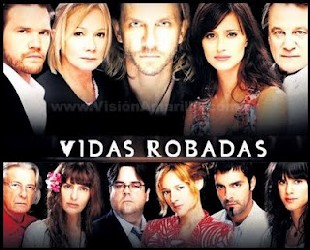 Vidas Robadas (in Spanish, "Stolen Lives", but officially translated as "Taking Lifes") is a 2008 Argentine live-action tv novel. It is loosely based on the Real Life kidnapping of Marita Verón by a net of human trafficking.
Advertisement:

The main character is Juliana Miguez, a girl from the (fictional) Argentine village of Río Manso, who is kidnapped and forced to work as a prostitute. The network of human trafficking is managed by Ástor Monserrat, who conceals his activities and the source of his wealth under faked activities as a businessman, even to his own daugther. Monserrat had two henchmen, Nicolás Duarte and Dante Mansilla.

Juliana's parents, Rosario Soler and Juan Miguez, began to search for her, but manage very little, as the local police is involved in the whole network and allows them to operate.

The other main character, Bautista Amaya, got involved in the case as well when Duarte killed his wife by hitting her with his car while Bautista was saving Duarte's wifeon the mountain, and did not stay to help. He seeks him to avenge his wife. Bautista was not initially aware of the network, or Duarte's relation with Monserrat, and began dating Monserrat's daughter, Ana. He get in contact with them later, and joined forces with them, along with his two friends, the retired prosecutor Fabio Pontevedra and the former police Tano Cigliotti.

Like other previous argentine novels, fiction was used as a means of social criticism. The series was declared of social interest by the city legislature of Buenos Aires and the House of Representatives of Argentina, and also won numerous awards, which emphasize the Martin Fierro de Oro in 2009.