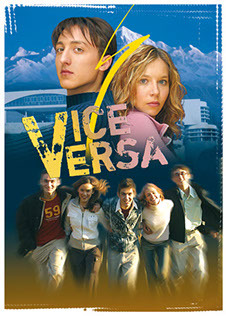 A French Gender Bender live-action series. Yep, this thing exists. It's a low-budget, very obscure series that aired in 2004 and 2005 in France. A rare curiosity, that is. The show lasted two seasons of 13 episodes each.

Thomas is an Ordinary High-School Student who, after being struck by an electric arc in a laboratory while his friends (Aude, Marc, Laurent and Nath) were protesting some experiments on animals, finds out he turns into a girl every time he hits the scar on his elbow. The duration of each transformation appears uncontrollable at first. Naturally, Hilarity Ensues. Thankfully for him, the transformations are not instantaneous, so he usually has some time to find a safe place where he can change, when it happens.

While in female form, he takes the identity of Emmanuelle in season 1, then Julia in season 2, after a change in how the transformation works.

For a while, the series was only available in Bulgarian

on Youtube (which means that even French-speaking people couldn't understand it!) in addition of being Out of Order and not even being present in its entirety.

Thankfully, for French speakers, it's still possible to get information about the series here

, and the whole first season of the show is also availablehere