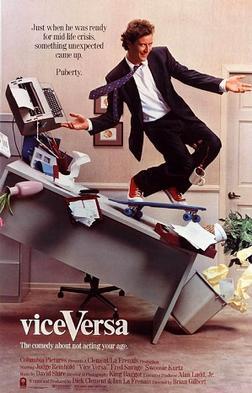 The comedy about not acting your age.
A 1988 body swap comedy featuring Judge Reinhold and Fred Savage. It revolves around a thirty-something department store executive Marshall Seymour (played by Reinhold) and his pre-teen son Charlie (played by Savage). Mixes this with a caper/MacGuffin plot involving a mysterious jeweled skull which Marshall accidentally acquires, and which is now being hunted by two crooks. The two plots are joined because when two people touch the skull and say the right words, it can make people grow up, shrink or change sexes to resemble each other.
Advertisement:

This being set in the Eighties, the family drama involves materialism and divorce. Marshall is estranged from Charlie's mother and has thrown himself into his career in retail management. He seems to like the lifestyle of expensive holidays and designer suits and he also has a killer bod. Charlie is small for his age and gets bullied by older/bigger boys.

One morning, as they get ready for the day, Charlie and Marshall have an argument about their lives. This leads to them both wishing to change places with each other, unfortunately while touching the mysterious crystal skull. The room fills with eerie light as Marshall gets smaller and smaller and Charlie goes through a full growth spurt in seconds, leaving them looking like exact duplicates of each other.

Half the film involves their attempts to live each other's lives whilst waiting to fix the change, so 'Charlie' (Marshall) goes to school whilst 'Marshall' Charlie goes to work. The other half involves the attempts of a couple of crooks to steal the skull back.

Based on a novel of the same name by F. Antsey. It is the fourth screen adaptation, with other previous adaptations released in the UK in 1916, 1937, and 1948.