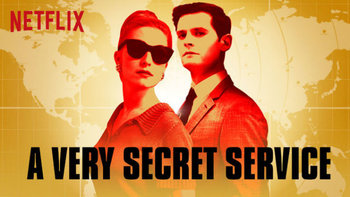 Au Service de la France (A very Secret Service in English) is a 2015 French comedy-drama series created by Jean-Francois Halin and distributed by Arte — eventually it got distributed worldwide by Netflix in 2016.

Set in Paris during the early 1960s, the series focuses on André Merlaux (Hugo Becker), a young recruit hired by the French Secret Services as a trainee officer who undergoes a series of tests and assignment under the watchful eye of operations manager Moïse. Merlaux is also reluctantly supported through his training by the three 'best' agents in the company: Roger Moulinier, who oversees African affairs; Jacky Jacquard, who is in charge of Algeria; and Jean-René Calot, representative for the eastern bloc.

As well as being a parody of spy dramas, much of the show's humour derives from a satirical portrayal of french society and politics, particularly France's relationship with other countries - however, the show is also quite accurate in these portrayals despite the surreal and over-the-top jokes.

In 2018, Au Service de la France was renewed for a second series.