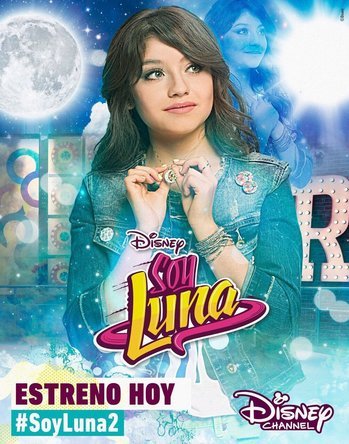 Soy Luna is a Disney Channel soap opera from the creative team behind Spiritual Predecessor Violetta. It lasted three seasons with a total of 220 episodes and aired from 2016 to 2018.

Luna Valente (Karol Sevilla) is a 16-year-old girl who lives happily with her adoptive parents in Cancun, Mexico. She loves rollerskating and works as a delivery girl along with her best friend Simón. However, everything changes when a rich businesswoman named Sharon Benson buys the Valentes’ house as her summer residence and offers them to move with her to Buenos Aires, Argentina as her staff.

Luna must adapt to a new life, a new private school and new friends. It’s made a whole lot easier when she discovers the local skating rink, Jam & Roller, which is a popular hangout for her peers. The young skater finds friendship, love and more as she seeks her true identity and investigates her past connections with the Benson family.

In January 2020, the first season was made available on Disney+ for the first time with English subtitles. The second and third seasons followed in mid-September 2020.

open/close all folders
The series in general
Matteo: It was part of the choreography.
Luna: You know full well it was not in the choreography.
We are everything that you see
Like shining stars
And you don’t want to understand
It’s that if if you don’t see it, you don’t see it.
I say “neta” to the “verdad”note Truth
I say “padre” to “genial”note Awesome
But there are things that don’t change
A universal language
My “campera” to your “chamarra”note Jacket
Everything spins, everything changes
You, my friend, my companion
It’s the same, you’ll see
Season 1
Luna: Romeo, Romeo, what brought you here?
Matteo: [Milking the Giant Cow] My feet.
Luna: [breaking character] What do you mean, your feet, you have to talk about love here!
Matteo: See? You're falling in love with me, Chica Delivery!
Luna: Nonononono, not me; Juliet is in love with you, I just want you to stick to your lines.
Matteo: Ok, ok. [in character] Love told me where to find you, it led me to you, and guided my eyes to this bench.
Luna: [breaks character] Balcony!
Matteo: [deadpan] It's a bench.
[...]
Matteo: [in character] I swear, my love, in the sunrays shining over this square... [stares into her eyes] Your eyes are as blue as the sky.
Luna: [breaks character] Matteo, they're green!
Matteo: It's a metaphor.
Luna: There's no distance that can change what I feel for you.

Season 2
"Each one of you has what the other needs. Luna, you're like air and water; you skate passionately, with emotion, you flow through the rink. But you lack concentration and technique. On the other hand, Ámbar, you're like fire and earth; you're all concentration and technique, and strategy, but you lack soul, emotion. If you two can learn from each other, you could go very far."
Season 3