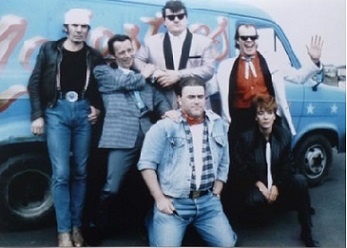 The Majestics make a brief pit-stop on their Silver Jubilee tour. Clockwise from top left: Vincent Diver, Fud O'Donnell, Danny McGlone, Bomba MacAteer and Suzi Kettles. And Dennis the roadie.
I got a girl. Here's the rub:
she makes me sleep in the tub.
Advertisement:

Cult hit from BBC Scotland and writer John Byrne (not the comic book guy) about the anniversary tour of Rock and Roll band, The Majestics, following the death of their lead singer, Jazza McGlone. Surviving members Vincent Diver, Bomba MacAteer and Fud O'Donnell recruit Jazza's younger brother, Danny, who's just returned from New York for the funeral, to replace him. Also tagging along on-and-off for the ride are Eddie Clockerty, the band's manager; his secretary, Janice Toner; Glenna, Vincent's pregnant girlfriend and Suzi Kettles, Danny's old classmate from the Glasgow School of Art.

Definitely not to be confused with a German Game Show from The '90s where the candidates had to do stripteases.