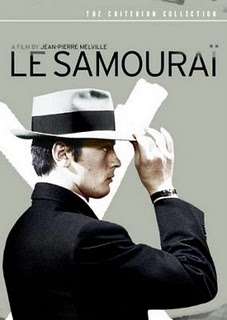 "There is no greater solitude than that of the samurai, unless it is that of the tiger in the jungle... Perhaps..."
—The Book of Bushido
Advertisement:

Le Samouraï, known in the US as The Godson or Cop Out (no, not that Cop Out), is a 1967 French crime thriller directed by Jean-Pierre Melville and starring Alain Delon. It follows a perfectionist hitman named Jef Costello as he sets up an alibi, performs a hit, and then tries to get away with it, all while staying true to his Bushido-like Code of Honor. He eventually finds himself on the run from both the police and his former employers.

Le Samourai is famous for being one of the first films to deal with the existential hero, and for deconstructing many of the tropes of the crime thriller and assassin genres.