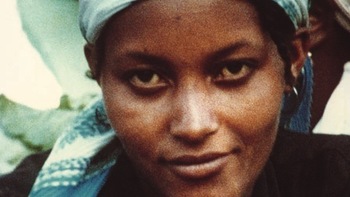 It's a documentary—well, sort of. It's really more of an experimental film. The conceit of the film has the narrator (Florence Delay in the French version, Alexandra Stewart in the English version) reading letters written to her by one "Sandor Krasna", a fictional cameraman. The letters are supposedly the narrator describing his travels and philosophizing about the things he sees.

Another chunk of the film concerns the narrator's travels in Guinea-Bissau, a country in West Africa that at that time had only recently gained its independence. The under-developed Guinea-Bissau is contrasted with highly technological Japan, with attention paid to the Marxist guerillas who fought against their Portuguese occupiers.

The documentary randomly skips around from subject to subject as the narrator waxes philosophic about time and memory. Other scenes include shots of Iceland, Paris, and San Francisco, where the camera journeys to various shooting locations for the film Vertigo.