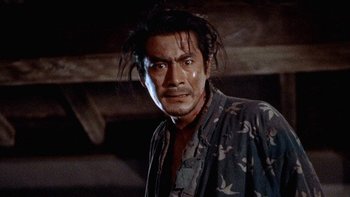 Toshiro Mifune. Why make a samurai movie with anyone else?
Advertisement:

Samurai I: Musashi Miyamoto is a 1954 film from Japan, a Jidaigeki samurai movie, starring Toshiro Mifune, which somehow is not directed by Akira Kurosawa.

It's actually directed by Hiroshi Inagaki.

The story starts out in the year 1600, towards the end of the Sengoku Period of Jidaigeki Japan. Takezo, a village commoner bent on winning fame and glory, wants to join up and fight in the shogunate wars. His buddy Matahachi is somewhat more reluctant to join up because he has something to keep him in the village, namely, his lovely fiancée Otsu. Takezo's enthusiasm wins his buddy over, though, and after extracting a promise from Otsu to wait for him, Matahachi joins up as well.

Unfortunately for Takezo and Matahachi, they pick the wrong side. Their army is routed at the Battle of Sekigahara

, a decisive defeat that ends the shogunate wars. Takezo escapes, helping a badly wounded Matahachi along. They stumble through the woods until they find a cabin, which belongs to attractive Oko and Oko's even more attractive daughter Akemi. Three months pass as Matahachi recovers from an injured leg. Matahachi kisses Akemi but she rejects him. Akemi in turn tries to seduce Takezo but fails.

Takezo and Matahachi are surprised to find out that the seemingly sweet Oko and Akemi make their living by looting the bodies of dead samurai and selling what they find. And what's worse, bandits are coming to claim the treasures that the two women have stored up.

Samurai I: Musashi Miyamoto is loosely based on the novel series Musashi, which in turn is based on the life of a real guy, legendary sword fighter Miyamoto Musashi—who was also known as Takezo. It was the first film in a trilogy, followed up by Samurai II: Duel at Ichijoji Temple and Samurai III Duel At Ganryu Island.