Film / The King of Comedy 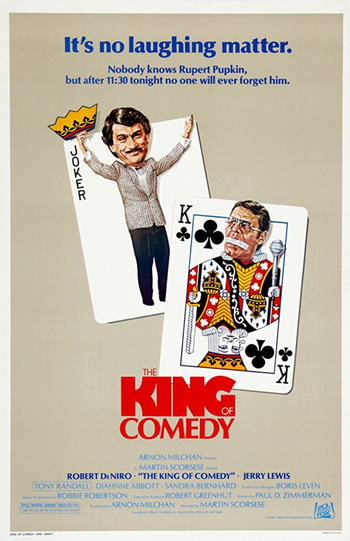 "Better to be king for a night than schmuck for a lifetime."
— Rupert Pupkin
Advertisement:

The King of Comedy is a 1983note technically 1982, going by its much earlier Icelandic release date, but the more official US premiere was two months later in February 1983 American Black Comedy film directed by Martin Scorsese and starring Robert De Niro and Jerry Lewis.

The story centers around the autograph hunter and aspiring comedian Rupert Pupkin (De Niro), whose ambition far exceeds his talent. One evening Rupert chances to meet Jerry Langford (Lewis), a successful late night talk-show host who craves his own privacy. Rupert, believing that his "big break" has finally come, starts stalking Langford in the hopes of landing a spot on his show, and soon begins to indulge in elaborate and obsessive fantasies in which he and Langford are colleagues and friends. Ignoring the polite attempts of Langford and his staff to brush him off, Rupert finally resorts to kidnapping him in order to become "king for a night."

This film was a real departure from Scorsese's earlier work (such as Mean Streets, Taxi Driver, and Raging Bull), due to its highly minimalistic style and absolutely unique tone. De Niro is also cast against type as a "real nerd", the definitive Loony Fan, while Lewis has a rare non-comedic role. Perhaps because of all this, the film was a huge commercial and critical failure in the year of its release. However, it has since acquired a cult following and is popular among both stand-up comedians and the likes of Paul McCartney for its poignant portrayal of celebrity culture. Joker takes significant inspiration from the movie as well, even featuring De Niro in a role comparable to Lewis's.

Random trivia: the film was the first from Regency Enterprises, and was distributed theatrically by future part-owner 20th Century Fox. It is the only film from the Embassy International era that Regency outright owns worldwide, and one of three (the others being Brazil and Legend) to which Regency has full international rights.