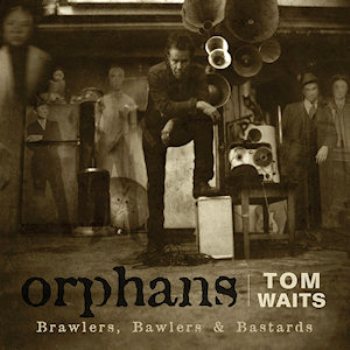 You can put all of my possessions here in Jesus' name, and nail a sign on the door
Advertisement:

Orphans: Brawlers, Bawlers & Bastards is an epic three disc set from Tom Waits, released in 2006. It started life as a fairly standard b-sides and rarities compilation (sometimes known as an "odds 'n' sods" collection, after an album in this mode by The Who). Waits quickly decided he had no interest in releasing such an album, so he and wife/collaborator Kathleen Brennan set about making something else: a tour through his past and present work divided into thematic thirds. New material was recorded for the project as well. The first disc covers Waits' harder, more rockish material. The second is dedicated to ballads and acoustic-sounding songs. The third is made up of Waits' experimental songs and not-quite-songs. There is some bleed between the groups, and Large Ham moments from Waits on all three. Altogether a good introduction to the man and his work. It was later released as a 7LP boxset with the last LP consisting of tracks not on the CD release.