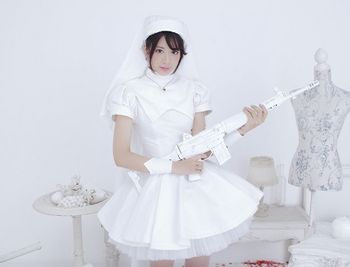 Kanon on World's end, Girl's rondo PV
Kanon Wakeshima (分島 花音) is a Japanese cellist, singer, and artist. She was born June 28, 1988, and rose to fame through a contest. She debuted under DefStar Records on May 28, 2008, with the single "Still Doll", but has since switched to Warner (Bros.) Records. She is most notable for the ending themes for the first two seasons of the anime Vampire Knight.
Advertisement:

In 2010, she formed the duo Kanon×Kanon with Kanon (bassist of An Cafe) to produce theme songs for anime series.