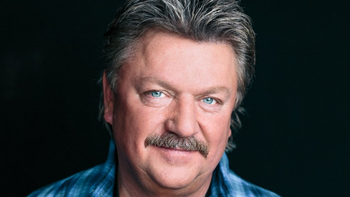 They got a love bigger than the Beatles,
Wild and free like a Rolling Stone,
They gotta love takes 'em higher than the Eagles,
Ain't life such a sweet, sweet song.
"Bigger than The Beatles"
Advertisement:

Joe Logan Diffie (1958-2020) was a Country Music singer who rose to popularity in The '90s. He was known for his honky-tonk sound and his mix of ballads and novelty songs.

A native of Tulsa and a former foundryman, he was divorced and bankrupt by the time he moved to Nashville in the mid-80s. An encouter with producer-songwriter Bob Montgomery led to him signing to Epic Records, who released his debut album A Thousand Winding Roads in 1990. Lead single "Home" made him the first artist to send a debut single to #1 on all three of the major country music charts of the time (Billboard, Radio & Records, and Gavin Report). Followup albums Regular Joe, Honky Tonk Attitude, Third Rock from the Sun, and Life's So Funny found his sound refining into a commercially successful product.

Although the hits dried up by the end of the decade, Diffie would continue recording, with later albums focusing more heavily on ballads. He also had a stray hit as a songwriter in 2005 when Jo Dee Messina covered his "My Give a Damn's Busted".

Diffie died on March 29, 2020 after being stricken with COVID-19, or coronavirus.

The kid guns the gas, car starts to swerve
Heads for a semi truck, jumps the curb
Truck hits a Big Boy in the Shoney's parking lot
He flies through the air, takes out the bank clock
Clock strikes a light pole, transformer sparks
Lines go down, town goes dark
Waitress calls the cops, says she saw it all
Swears a giant alien has landed at the mall
Cops ring up the mayor, say "There's panic in the streets
We hate to wake you up, but we can't find the chief"
Mayor says "Use your head, if he ain't in his car
He's hiding from his wife down at Smokey's Bar."