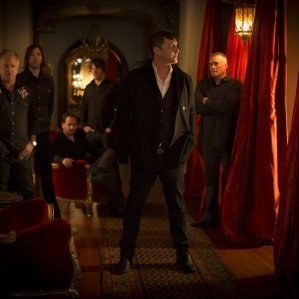 Founded in 1986, The Afghan Whigs are a long-running American rock band founded in Cincinnati by Greg Dulli (vocals, rhythm guitar), Rick McCollum (lead guitar) and John Curley (bass), though the lineup would change repeatedly through the years. With a sound that's something of a mix between punk, soul, funk and rock and Greg Dulli's love of dark, introspective lyrics dealing with topics like abusive relationships, drug addictions and self-loathing, the Afghan Whigs released six albums in the time between 1986 and 2001, when they broke up. They would temporarily reform several times in the years following until 2014, when they made and released their first new album in over 15 years, Do To The Beast. They continued this trend with In Spades, which was released in 2017.

During their hiatus, Dulli would go on to found The Twilight Singers, with whom he would release five albums, and The Gutter Twins, who would release one album and one EP.

Faded! This I trope!: