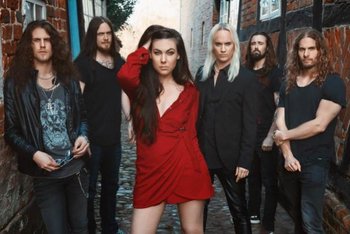 Amaranthe is a Swedish/Danish Power Metal/Melodic Death Metal band that are noticeable for their poppy melodies.

They formed in 2009 under the name Avalanche, but were forced to change the name due to a copyright issue. Shortly after, they released a demo called Leave Everything Behind, with Olof doing the basswork as Bassist Johan Andreassen joined after the recording. Formed by Jake E and Olof Mörck), the project began taking shape when singers Elize Ryd and Andreas Solvestrom signed on, as did drummer Morten Løwe Sørensen. Andreas left the band after 2013 to join the band Reaching Fall, and Henrik Englund took over gravel duty. Jake E then left the band in 2017 and subsequently formed a new group, Cyhra; Nils Molin of Dynazty then replaced him.

The name of the band, often questioned, is originally an uncommon French last name.

This Band provides the examples of each tropes: