Tabletop Game / The Forge of Fury 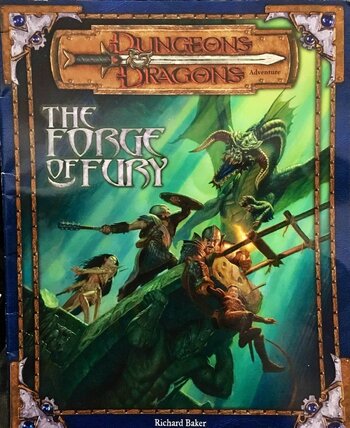 The Forge of Fury is an adventure module for Dungeons & Dragons 3rd edition, written by Richard Baker and released in 2000. The adventure is a Dungeon Crawl taking place in the ancient dwarven citadel of Khundrukar, intended for players of 3rd level and higher. It also serves as a followup to an earlier adventure, The Sunless Citadel.

Durgeddin was the mightiest dwarven smith of his era. In defiance of the orcs that sacked his home, Durgeddin built a new citadel in the mountain of Stone Tooth, naming it Khundrukar. From his hidden fortress, the great smith waged a terrible war against his hated foe. In time, however, the orcs discovered Khundrukar's location and lay siege to it for days on end. Durgeddin and his people perished within their fortress, and the orcs took what valuables they could find. Khundrukar is deep and has many hidden alcoves, however, and now, centuries after, adventurers and treasure seekers are drawn to Stone Tooth, seeking gold, glory, and the famed blades of Durgeddin. But Khundrukar has not lay quiet as the centuries passed, and there are worse things than orcs hidden within its nightmarish depths...

The module was re-released in the 2017 sourcebook Tales from the Yawning Portal for 5th edition, a "Best Of" collection featuring critically acclaimed adventures from previous editions. The adventure was always intended for a "generic setting", but the Tales version gives guidelines to place it on the worlds of Greyhawk, Dragonlance and Forgotten Realms