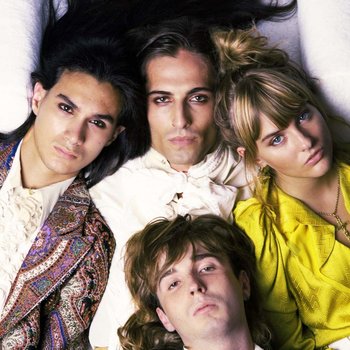 Måneskin is an Italian rock band.

Consisting of lead vocalist Damiano David, bassist Victoria De Angelis, guitarist Thomas Raggi, and drummer Ethan Torchio, Måneskin initially achieved fame as the runners-up of Italy's The X Factor in 2017. They released their debut album Il ballo della vita a year later in 2018, as well as a documentary film (This is Måneskin) about their career up to that point.

Ahead of their sophomore album's release in 2021, Måneskin competed in the Sanremo Music Festival with the song "Zitti e buoni" note English: "Shut up and behave" and emerged as the winning act, beating out stiff competition from the likes of Ermal Meta (co-winner, 2018), Francesca Michielin (co-runner-up, 2016 & 2021), and Fedez (co-runner-up, 2021), the latter of whom served as a judge on their season of X-Factor.

With their victory at Sanremo, they also accepted RAI's invitation to represent Italy in the Eurovision Song Contest 2021. They ultimately finished in first place, giving Italy their first Eurovision victory since Toto Cutugno's "Insieme: 1992" in 1990 and third overall. They are also the first Sanremo winners to also win Eurovision in the same year (and with the same song) since Gigliola Cinquetti in 1964. They also became the first X Factor alums to win Eurovision.