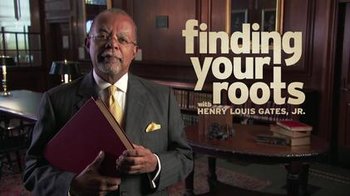 The show airs on PBS and helps show the context of the period any celebrities' ancestors were living in.