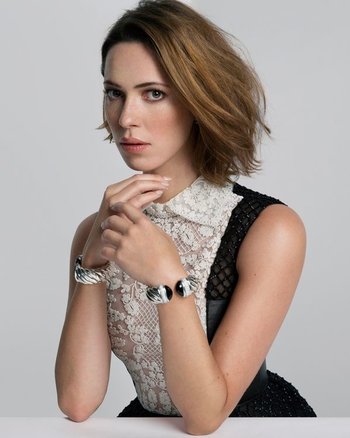 Rebecca Maria Hall (born 3 May 1982 in London, England) is a British-American actress. She's a second generation artist, the daughter of acclaimed English director Peter Hall and noted American opera singer Maria Ewing. Though it's not obvious due to her English Rose looks, she's of partial African-American descent on her mother's side.note Initially she'd thought herself to also have Native American ancestry, but discovered it wasn't the case via the TV series Finding Your Roots when they had investigated her family history.

Hall has been acting since she was ten years old, making her debut in the 1992 Live-Action Adaptation of The Camomile Lawn which was directed by her father. Her professional stage debut is also in her father's work, specifically the 2002 production of Mrs. Warren's Profession, which earned her enthusiastic reviews and the Ian Charleson Award.

She made her film debut in Starter for 10, though her true Star-Making Role is Christopher Nolan's The Prestige. She made her directorial debut in 2021 with an adaptation of Passing.

She married American actor Morgan Spector in 2015, and they have one child.