Web Video / Fighting in the Age of Loneliness 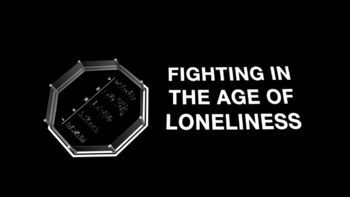 "For the Rest of your life; Go out, touch gloves...and fight."
Fighting in the Age of Loneliness is a 2018 Web-Documentary about the history of MMA, written and narrated by Felix Biederman and directed/produced by Jon Bois. It is divided into 5 chapters that trace the sport's entire history, both proud and not-so-proud, throughout the ages; It's origins across a number of martial arts, the early stars and villains, and explains why it became and has remained a part of the cultural touchstone regardless of or because of the parties who make the sport happen, and the forces outside it that give it shape. How a sport about weirdos and creeps can managed to find an audience and find magic, even in a world that feels like it's falling apart at the seams.

Fighting in the Age of Loneliness contains examples of these tropes.