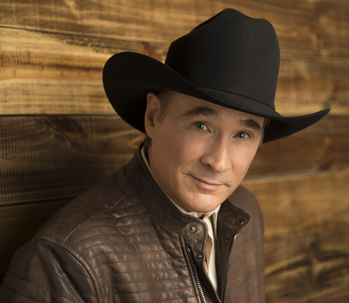 Clint Patrick Black (born February 4, 1962) is a Country Music artist who began as part of the "Class of '89," a batch of highly successful artists from that year, including Alan Jackson, Garth Brooks and several others. This new wave of artists helped reintroduce Three Chords and the Truth to the genre. Interestingly, he was managed by ZZ Top's producer, Bill Ham.
Advertisement:

Black made waves in 1989 with his debut single "A Better Man", which made him the first male country artist in 15 years to send a debut single to number one. The next three singles from his debut album Killin' Time also went the distance, and he only missed the top 10 once between then and late 1998. Although his commercial success dwindled in the 2000s, leading to a departure from RCA Records, he has continued to record. Between 2004 and 2008, he owned the Equity Music Group label, which released albums by him, Little Big Town, Carolina Rain, Laura Bryna, Kevin Fowler, and Carolyn Dawn Johnson.

Black also has a few acting roles to his credit, and he has been married to actress/singer Lisa Hartman since 1991. She sang backing vocals on his last #1 hit, "When I Said I Do".