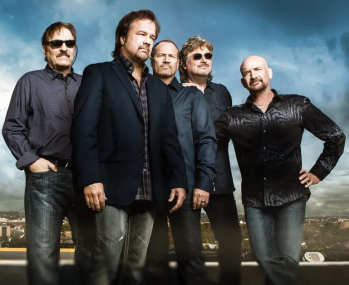 Country Music band who rose to popularity in The '80s. Restless Heart was assembled by Record Producer Scott Hendricks to record demos, but ended up fleshing out into a full-fledged band. The most famous lineup is Larry Stewart (lead vocals), John Dittrich (drums), Paul Gregg (bass guitar), Dave Innis (keyboards), and Greg Jennings (guitar). Verlon Thompson was the original lead singer, but he left on good terms before the band had issued its debut single.
Advertisement:

Signed to RCA Records in 1984, the band had modest success with its self-titled debut album, but broke through a year later with the disc Wheels. This album launched four straight #1 hits on the country charts, including "I'll Still Be Loving You", which achieved major pop crossover airplay. Two more albums, Big Dreams in a Small Town and Fast Movin' Train, continued in the band's hot streak of hits, producing a slick harmony and instrumentation driven sound akin to Eagles and Alabama.

In 1992, Stewart exited the band for a solo career. For the next album, Big Iron Horses, lead vocal duties rotated among Dittrich, Gregg, and Innis. During this timespan, The Band Minus the Face achieved two more major crossover hits in "When She Cries" and "Tell Me What You Dream", the latter featuring Canadian smooth jazz saxophonist Warren Hill. Innis had also quit before Matters of the Heart, a commercial flop that produced no major singles. From 1994 to 2004, the band was on hiatus, except for a brief reunion of everyone except Innis for three tracks off a Greatest Hits Album. During this hiatus, Dittrich was briefly in the group The Buffalo Club, which had a Top 10 country hit in 1997 with "If She Don't Love You" but broke up after less than a year.

The quintet reunited for good in 2004 to release Still Restless, a reunion album produced by Kyle Lehning (Randy Travis's longtime producer) and Mac McAnally, a songwriter and longtime member of Jimmy Buffett's Coral Reefer Band. Despite a minor success with "Feel My Way to You", the label on which the album was released closed soon afterward. The only subsequent releases from the band have been live albums, but Restless Heart continues to tour to this day.