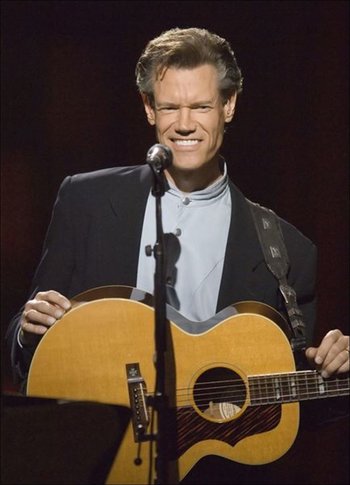 Influential Country Music singer of the 1980s and 1990s. Born Randy Bruce Traywick on May 4, 1959, he didn't break into the scene instantly: a deal with Paula Records in 1978 produced only two dud singles. Three years later, he released a live album as Randy Ray, but it wasn't until 1985 that he signed a contract with Warner (Bros.) Records, this time as Randy Travis. Even this wasn't an instant success, as his first Warner single, "On the Other Hand," stalled at #67 on the country charts. However, he had a Top 10 hit with "1982" only a year later, and then persuaded the label to re-release "On the Other Hand." Despite this unorthodox move, that song went on to become his first #1 hit. Of his next twelve singles, all but two went to #1 on the country charts. His first three Warner albums, Storms of Life, Always & Forever, and Old 8×10, are considered some of the finest country of The '80s, and a cornerstone of the genre's shift back to a more traditional, fiddle-and-steel sound compared to the pop crossovers that dominated the first half of the decade. Songs such as "On the Other Hand", "Forever and Ever, Amen", "I Told You So", "Too Gone Too Long", "Honky Tonk Moon", and "Deeper Than the Holler" are still among his most popular cuts.

His first release of The '90s, "Hard Rock Bottom of Your Heart" (from 1989's No Holdin' Back), was his longest-lasting chart-topper. After that, however, his career started to run hot and cold: the duets album Heroes & Friends in 1991 was met with tepid critical and radio reception despite going platinum and becoming his last #1 album. High Lonesome had a lead single ("Point of Light") which was written for George H. W. Bush's "Thousand Points of Light" program, followed by three consecutive cuts that Randy co-wrote with a then-rising Alan Jackson, including the #1 hit "Forever Together" (the two also wrote Alan's #1 hit "She's Got the Rhythm (And I Got the Blues)"). After two out of three cuts from a Greatest Hits Album also went to #1, Randy hit another speed bump in 1993 when Wind in the Wire, an album of cowboy songs for a TV movie of the same name, failed to send either of its cut into the Top 40. He bounced back for four more hits off 1994's This Is Me, including the #1 "Whisper My Name", but the singles off 1996's Full Circle bombed and he exited the label.

Travis then moved to DreamWorks Records for two more albums: You and You Alone had three Top 10 hits, while A Man Ain't Made of Stone also underperformed. At this point, Travis repositioned himself as a gospel artist, moving to Christian label Word Records for a string of five albums released between 2001 and 2005. Among the few singles from said albums, "Three Wooden Crosses" was the only one that got any attention from radio, becoming his last #1 hit to date. Returning to both traditional country and Warner Bros. in 2008, he put out Around the Bend, which got a couple Grammy nominations despite no hits. Carrie Underwood covered "I Told You So" in 2009 and eventually re-released the song as a duet with him, bringing him into the Top 10 one last time. The success also dovetailed into his 2009 greatest-hits package I Told You So: The Ultimate Hits of Randy Travis.

Travis suffered a Creator Breakdown in the early 2010s that culminated in a series of drunken antics. He later suffered a major stroke, but recovered in time to cut two covers albums: Influence, Vol. 1: The Man I Am and a second volume.

In 2016, Travis was awarded the highest honor in country music when he was inducted into the Country Music Hall of Fame.