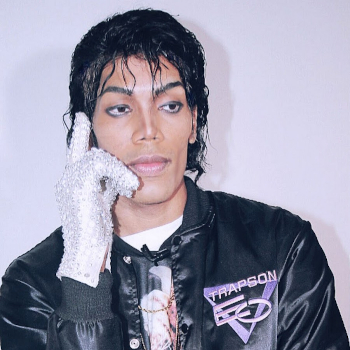 Trapson, likely thinking of what parody to do next.
Advertisement:

A common question thrown around music circles is "How would Michael Jackson sound if he was a modern-day singer?" Well, Michael Trapson (real name Dean Anthony Morrow Jr.) not only answers that question, but takes it to the logical extreme, re-imagining Jackson as a modern-day Trap rapper/singer, complete with gratuitous Auto-Tune, stereotypically repetitive lyrics, smoking weed and drinking lean, carrying guns, and videos featuring half-naked women twerking and dancing in the club.

Originally starting as a rapper under the name "OG Cano", Morrow got the idea of Jackson being a trap artist from a relative, and ran with it, eventually resulting in "Billie Jean and I Dab

Despite being on the extreme end of Alternative Character Interpretation, Trapson's parodies are very respectful of Jackson and his work, and goes the distance to make sure the the songs, videos, and events in Jackson's life are depicted accurately, while still utilizing artistic license for humor's sake, ranging from his rumored beef with Prince, to Captain EO.