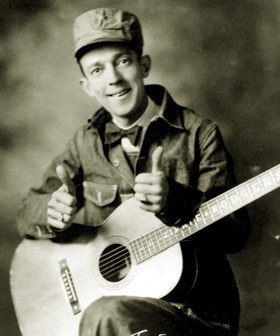 The Singing Brakeman
James Charles Rodgers (September 8, 1897 – May 26, 1933) is a legendary musician and has been titled "The Father of Country Music". He was particularly famous for yodeling in some of his songs. While he wasn’t exactly the poor orphan kid as he was depicted in his music, he did have an unprivileged childhood which would affect his music. He taught himself how to play guitar and learned to sing in Church. After spending a dozen years working at the railroads, starting at age 14, he got tuberculosis and was too ill to continue work on the railroad. He used this time to focus on music and spent the next few years playing with amateur bar bands.
Advertisement:

His big break came when he learned that Ralph Peer, a talent scout for the Victor Talking Machine Company, was hosting auditions in Bristol, Tennessee in what would become known as the Bristol Session. He performed the day after the Carter family, who would also become very influential country artists, and both got signed by Peer. Rogers recorded Blue Yodel (T is for Texas) in 1927 and it turned him into a national star. He recorded many hits within the next 5 years, including 12 sequel songs to the Blue Yodel. 8 and 9 were particularly famous as they were collaborations with Louis Armstrong. Rodgers also starred in the 1929 film “The Singing Brakeman”.

His tuberculosis though took its toll in 1933 where he became increasing ill. While recording a number of songs in New York, he collapsed on the street and died on May 26, 1933 at only 35 years old. Despite his short life, he had a profound impact on the development of country and rock music and earned nicknames such as Blue Yodeler, the Singing Brakeman and the Father of Country Music. He left behind 110 records which have since set the emotional tone of future country music works and was the first inductee of the Country Music Hall of Fame. He has also been inducted in the Songwriter Hall of Fame, The Rock N Roll Hall of Fame and the Blues Hall of Fame.