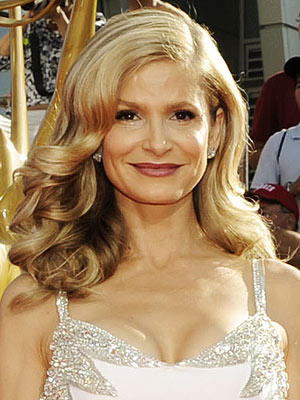 "I have too much respect for the characters I play to make them anything but as real as they can possibly be. I have a great deal of respect for all of them, otherwise I wouldn't do them. And I don't want to screw them by not portraying them honestly."
Advertisement:

Kyra Minturn Sedgwick (born August 19, 1965 in New York City, New York) is an American actor. She hails from Upper Manhattan's socialite circles; her cousin is the late model and actor Edie Sedgwick, who worked with Andy Warhol in the '60s, inspired the songs "Like a Rolling Stone" and "All Tomorrow's Parties", and had her life dramatized in the film Factory Girl.

She is best known for her portrayal of Georgia-born, CIA-trained Brenda Leigh Johnson, Chief of the LAPD's Major Crimes Division, on TNT's crime drama The Closer. She received six Emmy Award nominations for the role — finally winning in 2010 — and won a Golden Globe in 2007.

She has been married to Footloose star Kevin Bacon since 1988 and has two children, Travis and Sosie. On Finding Your Roots, she and Bacon were discovered to be (distant) cousins.