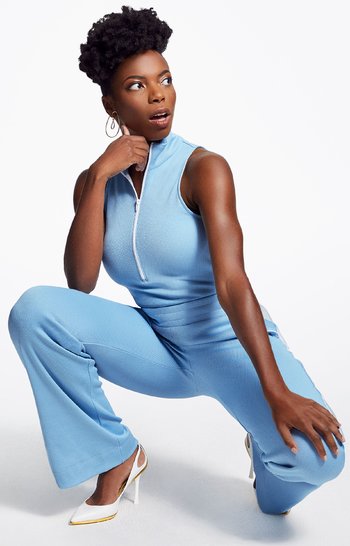 The 39th season of Saturday Night Live met with some controversy. Because of the surplus of white cast members they hired and kept on the show, a lot of viewers (and even cast members Jay Pharoah and Kenan Thompson) complained that SNL had no racial diversity in the form of a black female cast member. Following the show making fun of itself for that on the episode hosted by Kerry Washington, SNL auditioned many black comic actresses and stand-up comediennes for a chance to be on the show (some of which included Erica Ash, from Saturday Night Live's rival show MADtv and The Big Gay Sketch Show, which had Kate McKinnon on it; Tiffany Haddishnote who did host an episode in 2017, becoming the first black female comedian to ever host the show and Amber Ruffin.note While she did not end up passing the audition, Ruffin ended up being picked for Late Night with Seth Meyers and subsequently Peacock's The Amber Ruffin Show. Sasheer Zamata (along with LaKendra Tookes and Leslie Jones, who were hired as writers...until the latter became a one-woman Spotlight-Stealing Squad) was hired on the show. Though she didn't become a breakout star like Leslie Jones did, Sasheer at least proved that she was good at celebrity impressions (mainly Beyonce, Michelle Obama, Lupita Nyong'o, Taraji P. Henson as Cookie from Empire, Diana Ross, and even Lenny Kravitz) and not always resorting to Sassy Black Woman roles.