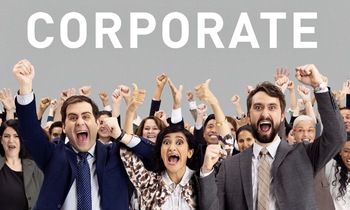 From left to right: Jake, Grace, Matt.
Matt: Am I a weak person?
Jake: Well, you're definitely weak. I don't know if you're a person.
Advertisement:

The show was known for its Black Comedy and Comedic Sociopathy, exploring depressingly bleak topics with a detached mundanity as it portrayed the struggle to survive in a soul-deadening office job.