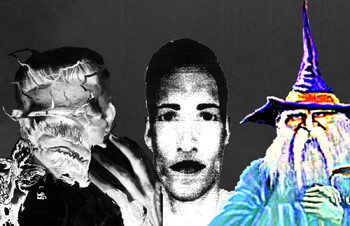 Rozwell is best known for three works: the "roguelike" album NONE OF THIS IS REAL, the Alternate Reality Game mostly known as "Erratas", and its associated tie-in musical side project KFC Murder Chicks.

His musical output has evolved over the years from extremely long and dense beat tapes full of upwards of 30 or 40 songs, to increasingly melodic and focused albums, while still retaining an extremely lo-fi production value and an emphasis on strange, obscure spoken word samples.

Elements of this sound carried over into his initially-anonymous Industrial Metal side project KFC Murder Chicks - ostensibly a band composed of three women with Rozwell merely providing mixing and mastering on two of their tracks. This "band" was the Entry Point into the "Erratas" ARG, a bizarre narrative revolving around a plot by an advanced AI algorithm to delete all traces of itself from the internet. Due to personal events in Rozwell's life, this ARG was (apparently) abandoned, until, in a bizarre turn of events, it received heavy amounts of attention in 2019 due to coverage from high-profile horror YouTubers such as Nightmare Expo and Blameitonjorge. By this point, the ARG had been left dormant and unfinished, and Rozwell has confirmed that there are no plans to revive it.