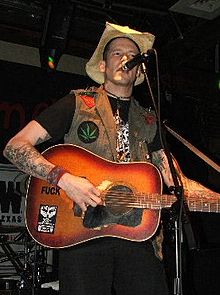 Shelton Hank Williams (born December 12, 1972) also known as Hank Williams III, Hank III or just "3"(stylized with a modified Black Flag logo as Hank's official logo), is a Country Music artist who performs in the Alternative Country subgenre. The son of Hank Williams Jr. and grandson of the legendary Hank Williams. Hank III is noted for his strong vocal and physical resemblance to his grandfather.
Advertisement:

Hank III started out as a Punk Rock and Heavy Metal musician before starting his Country Music career on Curb Records, a relationship that is understandably a sore point due to Curb's Executive Meddling. While signed to Curb, he gained a cult following for his live shows, which combined Outlaw Country, Punk-Country and Country-Metal fusions, capped with a performance by Hank's Death Metal band Assjack.

Williams recorded two more albums for Curb, Damn Right, Rebel Proud and Rebel Within, who issued both albums under the Sidewalk Records label, which had gone defunct in 1970, due to Curb's apparent outright refusal to have anything to do with Hank III's profane lyrics and Outlaw style. Following these albums, Hank finally got out of his contract with Curb. After Williams left the label, however, Curb released This Ain't Country under the name Hillbilly Joker without Hank's permission, ironically on Curb Records, and also making no attempt to advertise the fact that it is a metal album, not a country album.

In response to the unauthorized release of Hillbilly Joker, Williams suggested that his fans download or trade the album rather than give their money to Curb. Hank's been busy releasing albums independently on his own label, including a Country album (with appearances by Tom Waits and Les Claypool), a Doom Metal album and an album which fused Speed Metal with sounds of an auctioneer and cattle.