Film / Lars and the Real Girl 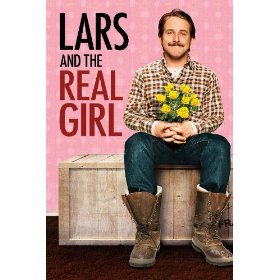 "Those are nice, huh? And they're not real, so they'll last forever."
—Lars Lindstrom, giving flowers to Bianca
Advertisement:

Lars and the Real Girl is a 2007 American dramedy film, directed by Craig Gillespie.

Lars Lindstrom (Ryan Gosling) is a quiet, somewhat asocial man. He lives in a garage next to the house of his brother Gus (Paul Schneider), and has a crippling fear of personal interaction. A co-worker, Margo (Kelli Garner), is interested in him, but he avoids anything more than brief encounters.

One day, he comes to Gus' door and says that he's met a girl over the internet — a sweet, wheelchair-bound missionary named Bianca. Gus and his expecting wife, Karin (Emily Mortimer), are eager to agree that she can stay over. But the "girl" turns out to be a bit less... alive than they imagined. It seems that Lars has finally gone crazy, and has fallen in love with a Real Doll sex doll, believing she's a real woman.

After taking Bianca and Lars to see the family doctor/psychologist Dagmar (Patricia Clarkson), she tells Gus and Karin that, for whatever reason, Lars has convinced himself that Bianca is alive and trying to tell him otherwise would only hurt his already fragile mental condition. So they, and the rest of their small town, all agree to play along with the illusion simply to make Lars feel at home with his new love.