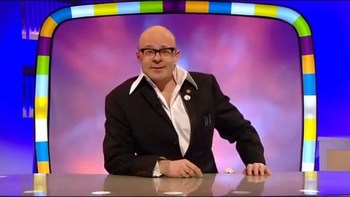 There's only one way to find out - FIIIGHT!

The United Kingdom's answer to Mystery Science Theater 3000 and/or The Soup. The series ran from 2001 to 2012. Comedian Harry Hill went through television programmes that had been shown that week, often Soap Operas or one-shot documentaries, and lampoons them - for weak acting, bad writing, or general WTF-factor. It's a highly Affectionate Parody, though, with lots of silly facial expressions, cuddly Radio 4 innuendo and episode-long Running Gags. Once an Episode, two characters, concepts or something which Hill finds particularly notable would have a slapstick fight on stage.

It was a silly program, but surprisingly intelligent, and genuinely funny. In many ways, it's what snarky web review shows would be if they had a budget and access to the real actors and sets from TV shows - Hill uses the latter to insert himself into scenes from this week's TV and sometimes even interact with the characters.