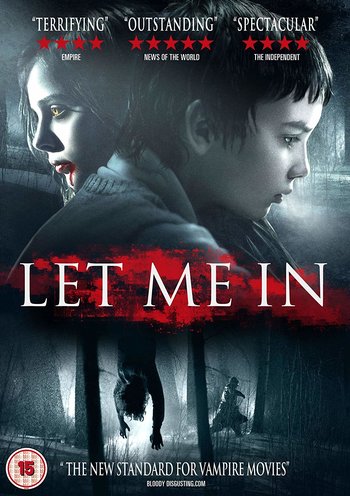 "She will keep you safe. She will keep you close. She will keep you forever"
Let Me In is a 2010 horror film by Matt Reeves (of Cloverfield, Planet of the Apes, and The Batman fame), starring Chloë Grace Moretz, Kodi Smit-McPhee, Richard Jenkins, and Elias Koteas. It is an English-language remake of the Swedish film Let the Right One In, based on the book of the same name by John Ajvide Lindqvist. It is produced by Hammer Horror, making this their first movie in decades.
Advertisement:

In 1983, in Los Alamos, New Mexico, young Owen is tormented by bullies and frustrated with his parents, who are too wrapped up in their divorce to offer him much sympathy. Everything changes for him when Abby moves into the apartment next door. However, Abby is not what she seems, and as Owen strikes up a friendship with her, he is soon drawn into her dangerous life.