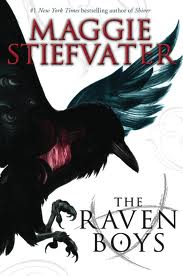 Every year, Blue Sargent stands next to her clairvoyant mother as the soon-to-be dead walk past. Blue herself never sees them—not until this year, when a boy emerges from the dark and speaks directly to her. His name is Gansey, and Blue soon discovers that he is a student at Aglionby, the local private school for wealthy boys. Blue has a policy of staying away from Aglionby boys. Known as raven boys, they can only mean trouble.

But Gansey is different. He has it all—family money, good looks, devoted friends—but he’s looking for much more. He is on a quest that has encompassed three other raven boys: Adam, the Scholarship Student who resents all the privilege around him; Ronan, the fierce soul who ranges from anger to despair; and Noah, the taciturn watcher of the four, who notices many things but says very little.

For as long as she can remember, Blue has been told by her psychic family that she will kill her true love if she ever kisses him. She never thought this would be a problem. But now, as her life becomes caught up in the strange and sinister world of the Raven Boys, she’s not so sure anymore.

The series is written by Maggie Stiefvater and is four books long. The first book in the series, The Raven Boys, was released September 18, 2012. The second book, The Dream Thieves, was released September 17, 2013. The third, Blue Lily, Lily Blue, was released October 21, 2014. The fourth, The Raven King, was originally scheduled to be released on September 29, 2015, but was pushed back to April 26, 2016 in order to give Maggie Stiefvater more time to edit. The series is being adapted into a television show produced by Catherine Hardwicke. The Dreamer Trilogy, a sequel series focused primarily on Ronan, is currently being written. The first book in the series, Call Down the Hawk, was released on November 5, 2019.

The Raven Cycle contains examples of: