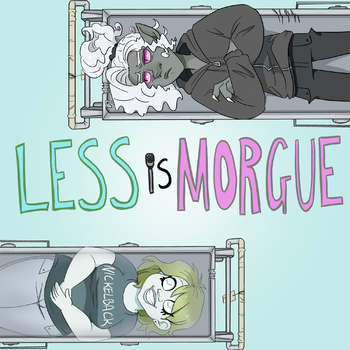 The show where a Ghost and a Ghoul talk about stuff. (Top to bottom: Riley, Evelyn)
Evelyn: Hey everyone! If you're listening to this, it means you like having a good time, and there are other worlds than these!
Riley: In Tokyo, you can pay the Family Romance Corporation to imitate your friends, co-workers, and loved ones. Me? I do it for free. Welcome to the show. I'm Riley, your best Ghoulfriend. [Shudders] God, it never gets any easier to say.
Evelyn: And I'm Evelyn, your ghost host with the most!
— The Typical Opening Format
Advertisement:

Imagine you live in a world where monsters and ghosts are just an accepted part of life, and also imagine you're a huge fan of Nickelback.

You're now in the shoes of Evelyn Hooper, a woman in her early twenties who got crushed by a falling stage light in 2004 while standing ten feet from Chad Kroeger.

During her sixteen year wait period for getting into the afterlife - most of which, by the way, was spent filling in the most tedious paperwork imaginable - an asocial, eccentric homebody ghoul named Riley Almanzor happened to dig up and chow down on Evelyn’s body.

As a result of this, they're now stuck together. So, naturally, they're gonna host a podcast about it.

Less Is Morgue is Riley and Evelyn's beautiful and disastrous attempt to record and produce that podcast, often interrupted by everything from Blackbeard's ghost to an irritating tech bro with a God complex. When they're not being tripped up by insane guests, gate-crashers, or Riley's disapproving parents, the weird and wacky personalities of our hosts do just as much to keep them from reaching their goals.

This episodic Horror Comedy audio sitcom began on Valentine's Day of 2020, and has been releasing episodes every other Friday since. Episodes are free to listen to and can be found here

, or wherever you listen to podcasts. Season 2 premiered on September 3rd of 2021.

Less is Morgue provides examples of:

Riley: Then I guess that brings this disaster to a close.
Evelyn: I think it went pretty well, all things considered.
Riley: What I'd give to live in your world, Evelyn, it always sounds so much nicer than mine.