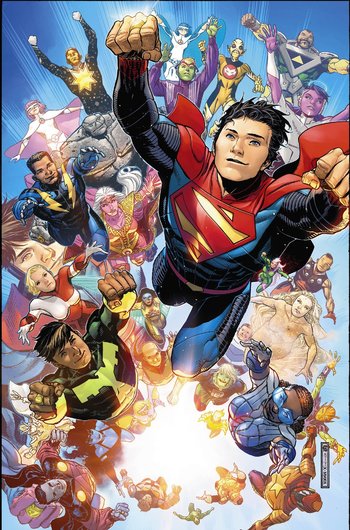 From the pages of Bendis' run on Superman, a new Legion of Super-Heroes seeks out the membership of Superman's very own son Jon Kent, due to his involvement in the establishment of the United Planets. What follows is a series of events circulating around Aquaman's trident and the President of the United Planets being less than okay with super-powered teenagers just bending time and space without even a shred of conscious thought at the possible ramifications.

This may sound like a pretty interesting enough premise, but it's all an aimless affair, really. Questions are brought up, but answers are nonexistent. And Jon doesn't really have much agency in the whole thing.

And once the series was canned after 12 issues, the Legion's two issue miniseries for DC Future State was established as the new status quo for the actual Legion ongoing...

Except that wound up going nowhere.

Instead, after his Future State entries, Bendis would take on the Justice League. After that, his take on the Legion would be the subject of a resurgence in Justice League vs. the Legion of Super-Heroes, which sees both superhero teams joining forces when both realties are in peril at the same time because of a great darkness.

And if that wasn't enough, Bendis also announced he was spearheading an animated adaptation

of this particular run of the Legion for HBO Max.

The 2020 Legion contains examples of: