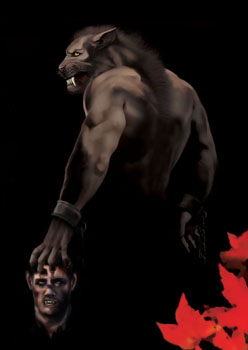 "This plague is one of the reasons this agency exists. Oldbloods and humans fighting it side-by-side. Makes a nice change from us fighting each other, I suppose."
— The Director
Advertisement:

In a world of Skins

where vampires and shape-shifters exist beside humans, an occult arms struggle has began. Young children with no names and no past are infected with supernatural plagues and sent into populated areas by occult terrorists.

One by one humans exposed to these plague carriers lose their humanity. Only the supernatural races who live on society’s edge remain immune. The Coven, a privately funded agency, recruits both Oldbloods and humans to fight these plagues and those behind them. The webcomic (and its lighter companion comic strip Under My Skin) focus primarily on an elite Coven team made up of the three main characters.

Skins was a prototype comic and has ended, but the series was continued as Smoke Fur And Stone. The comic has also been removed from DeviantArt, and any links here no longer work.