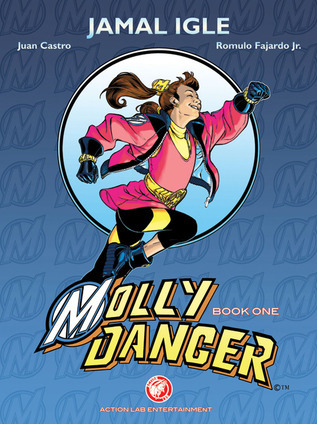 Molly Danger is a Superhero Comic Book by Jamal Igle.

Molly Danger is a super-strong seemingly immortal little girl who's been protecting her hometown of Coopersville, New York for the past 20 years. Assisted by D.A.R.T. (the Danger Action Response Team), Molly battles the Supermechs, a group of cybernetically enhanced criminals who always manage to get away after Molly beats them.

As exciting as her life sounds, what Molly really wants is a normal life with a normal family, something D.A.R.T. constantly tells her she can't have. However, that all changes when D.A.R.T. hires a new pilot named Austin Briggs. Briggs joined the team to try and connect with his stepson Brian, who is a big fan of Molly Danger. However, a kinship starts forming between Austin and Molly, and from there, Molly begins to question everything she ever thought she knew about D.A.R.T.