Film / Save Your Legs! 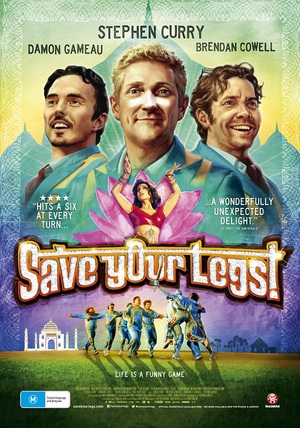 Life Is A Funny Game
Advertisement:

Save Your Legs! is a 2012 Australian comedy film. It follows the story of Edward "Teddy" Brown and his two mates on a Melbourne cricket team, who travel to India for a tour.

Edward 'Teddy' Brown lives for his suburban cricket club and his two best friends, Rick and Stavros. But when he realizes that his beloved team mates are moving on and growing up, he's forced to take matters into his own hands and remind them of just how good cricket can be. Rallying a boyhood dream and his own teenage obsession, 35 year old Teddy leads his very ordinary cricket team into the extraordinary heart of India, on an audacious three match tour and a mission to meet cricketing legend, Sachin Tendulkar. While Ted's best-laid plans are brought undone by the chaos of India, stumps fly, friendships fray and a life-changing comic adventure unfolds. The dream tour becomes a nightmare and the men are forced to face the realities of their friendship, confront their fears and Ted learns to move with the changing times.