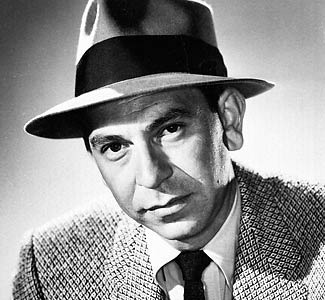 This is the trope page. My name is Webb.
John Randolph "Jack" Webb (April 2, 1920 – December 23, 1982), also known by the pen name John Randolph, was an American actor, television producer, director, and screenwriter, who is most famous for his role as Sergeant Joe Friday in the radio and television series, Dragnet. He was also the founder of his own production company, Mark VII Limited. Webb was essentially the inventor of the Police Procedural, and either created or was the obvious inspiration for most of the better-known cop shows of the 60s and 70s. Webb was married for 6 years to actress Julie London, who later played Nurse Dixie McCall on his series Emergency! alongside her new husband, Bobby Troup ("Doctor Joe Early"). When he died in 1982, he was given a full Los Angeles Department police funeral, due to his extensive work with the department. Sgt. Friday's badge, 714, was officially retired as well.

TV Series he produced include:

Films he starred in include: