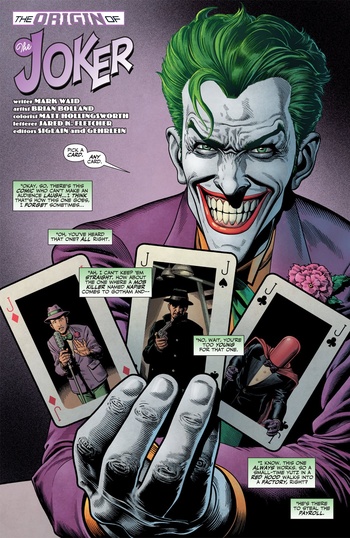 "Pick a Card... any card..."
"The two of wives?
Excellent Choice!
Advertisement:

One of the stock magic tricks.

At its simplest, the magician invites an audience member to "pick a card, any card" out of a deck of cards, and memorize which card it is. The card is then placed back in the deck, which is shuffled, then the magician picks out a card, displays it, and says "Is this your card?"

It's rarely done now without some extra decoration, like the card appearing to leap out of the deck of its own accord, or disappear from the deck and appear in the audience member's pocket, or the correct card number and suit being written in an envelope that was sealed before the trick started.

As with Saw a Woman in Half, the real trick to this trick is well enough known that fictional depictions may feel free to discuss it. The clever part is not where it appears to be: it's not that the magician has a secret way of detecting which card the mark has selected, it's that the magician has a way (a technique called the Magician's Force) of making sure the mark picks the card he wants them to pick.

In fiction, the bare-bones version is a favourite of amateurs trying to impress somebody — and they almost always fail to get the right card at the end. The would-be magician may be shown flagrantly sneaking a look at the card before putting it back in the deck (which doesn't always prevent him from subsequently identifying the wrong card at the end anyway). Another common way for the trick to fail is for the would-be magician to be caught using a deck containing 52 copies of a single card.

Another common fictional twist is for the card to turn out to not be a playing card.