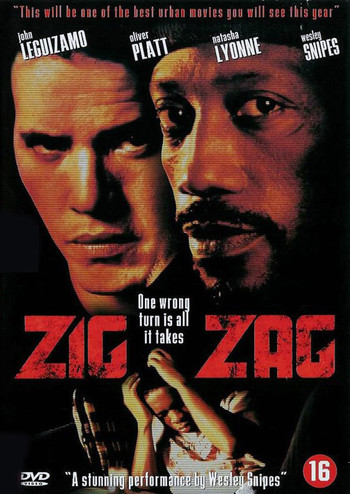 Zig Zag is a 2002 American drama film written and directed by David S. Goyer, based on a 1999 novel by Landon J. Napoleon.
Advertisement:

Louis "ZigZag" Fletcher (Sam Jones III) is a fifteen-year-old autistic boy who works as a dishwasher at a restaurant. His father David (Wesley Snipes) threatens to kick him out of the house if he can't pay rent, so ZigZag steals $9,000 from his boss, Mr. Walters (Oliver Platt), using his talent for remembering numbers to break into the safe. Dean Singer (John Leguizamo), ZigZag's mentor from the Big Brother program, is dying of cancer, and before he goes, he is determined to return the money, even though ZigZag's father has already used it to pay off the loan shark Cadillac Tom (Luke Goss).