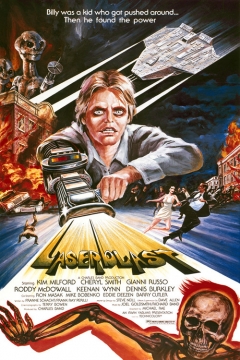 Laserblast is a 1978 low-budget sci-fi movie.

The movie begins with two aliens landing on Earth in pursuit of a third alien.note Or is he a previous Earth boy who was captured by the weapon? After a pathetic attempt to hide behind a bush, the third alien's pursuers unceremoniously disintegrate him and then leave. Short movie, huh?

...Well, not exactly. See, the bad guy alien was carrying a rather large laser cannon with him, which the other aliens neglected to pick up (we get to see their boss flip out at them over this later). Said cannon is later found by Billy Duncan (Kim Milford), a teenager who's perpetually picked on by bullies. Billy then starts using the cannon to gain revenge on those who wronged him. The laser cannon turns out to have an evil influence over its user, because Billy not only grows addicted to the cannon's destructive power, he also starts to undergo some kind of strange mutation. Meanwhile, the aliens have realized their mistake and are heading back to Earth to retrieve the cannon...

This was one of the first film scoring assignments of Joel Goldsmith (Jerry's son), who went on to become the musical voice of Stargate SG-1 and its spinoffs.