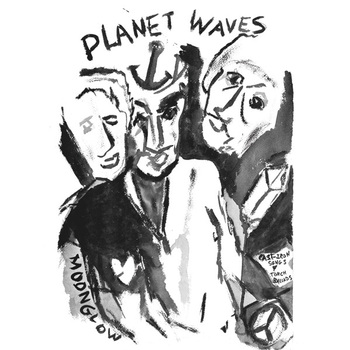 This album will make you stay forever young.
Advertisement:

It's notable for being a Crossover collaboration between Dylan and The Band, with whom he'd toured in The '60s. At the time Planet Waves received a lot of media coverage because Dylan hadn't toured regularly since 1966 and The Band had become very popular in their own right. Commercially and critically it did very well, generating at least one undisputed classic song with "Forever Young", which is featured twice on the record but in two different versions, because Dylan and the rest of his musicians couldn't decide which take was the superior one. (Dylan even considered leaving the song off the album entirely, but everyone else involved covinced him to do otherwise.) "Forever Young" wasn't released as a single, but the album's opening track, "On a Night Like This", was and became a minor chart hit.

In a case of What Could Have Been, the album was originally going to be titled Ceremonies of the Horsemen—a reference to the song "Love Minus Zero/No Limit" from Bringing It All Back Home—but a last-minute title change eventually settled on Planet Waves.

Following its release, Dylan and The Band embarked on a joint North American tour, which produced the live album Before the Flood later that year.