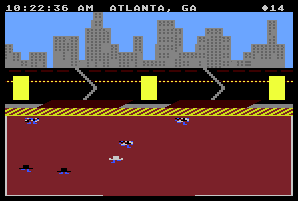 A cowboy hat rescuing Georgia from TV fuzz?
"Somewhere in America, this dangerous Fuzzbomb is on the loose!"
Advertisement:

Agent USA is a 1980s edutainment title designed to teach United States geography to elementary school children. But it's also an action-packed race against the clock to save the nation from a Zombie Apocalypse! A scientist named Elma Sniddle tried to create a high-tech TV by hooking up her television set with some strange crystals she found in her backyard, but instead she created the FUZZBOMB! This sentient, malevolent entity travels the countryside, and anybody who comes in contact with it turns into a Fuzzbody, a mindless walking ball of TV fuzz. Fuzzbodies also travel the nation, turning anyone they touch into fuzz as well. As the eponymous agent, who looks like a white cowboy hat with blue feet, you are the only one that can stop this menace and destroy the FuzzBomb once and for all!

The game takes place inside the train stations of around 100 cities across the United States. Each city has a local train that connects it to around ten of the surrounding cities. In addition, each state capital has an info booth where you can track the fuzz menace as it spreads and also check the current location of the FuzzBomb (as it moves around on occasion). Finally, several major US cities like Los Angeles, New York, Chicago, Atlanta, etc. have high speed bullet trains that only connect with each other, allowing you to quickly traverse the nation without having to pass through places like Scranton or Duluth every time you need to get somewhere.

That's the educational part. The real fun, however, comes from the gameplay. You start with 10 crystals. If you lay one on the ground, they begin to multiply, allowing you to eventually store up to 100 crystals. Normally the citizens of each town, represented by black top hats with feet, wander around each station, getting on trains and stealing your crystals if you're not careful. However, the closer you get to the FuzzBomb, the more Fuzzbodies you encounter, who will chase you down. Laying a crystal in front of a Fuzzbody will turn it back into a normal citizen, but any normal citizen that touches a Fuzzbody will become one as well. Each hit from a Fuzzbody will make you lose half your crystals, and if you have no crystals, well, you get fuzzed as well and no longer can control yourself! When you finally reach the city where the FuzzBomb is found, you must touch it with 100 crystals to blow it up and eradicate the fuzz menace forever! This is made difficult by the numerous Fuzzbodies surrounding it, as each Fuzzbody homes in on you trying to steal your crystals, and if you touch the FuzzBomb with fewer than 100 crystals, you get fuzzed!

For being an edutainment title, Agent USA was a pretty fun action/arcade game that required quick reflexes and timing to navigate through the Fuzzbodies and grow the crystals needed to win. It was released for the Atari 8-Bit Computers and Apple ][, and then ported to the Commodore 64 and IBM Personal Computer as well.

It also had an awesome theme song.